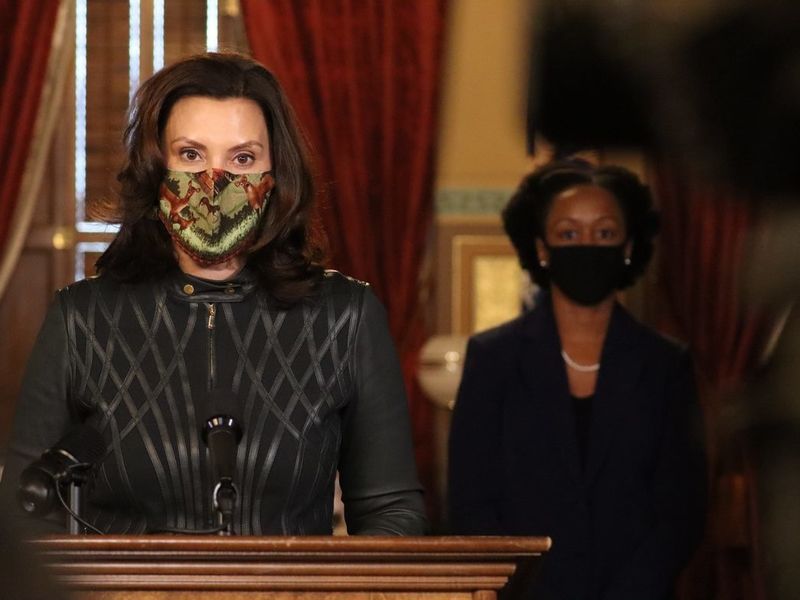 Gov. Gretchen Whitmer warned restaurant and bar owners in Michigan on Tuesday against defying her state health department’s shutdown orders and reopening as deaths from COVID-19 continue to surge.

“I would discourage people from willfully breaking the law,” the governor said at her weekly press conference.

The Michigan Department of Health and Human Services added 190 deaths to the toll from the global pandemic, 30 of which came from previous days.

The 160 deaths over a 24-hour period ending at 10 a.m. Tuesday is the highest daily death toll from COVID-19 since 189 deaths were recorded on April 25. The daily record of 232 deaths was set on April 21, according to state records.

The daily average number of deaths from COVID-19 has doubled in the past three weeks, state data show, underscoring how fatalities from the novel virus lag behind increases in caseloads and hospitalizations that have been surging for weeks.

At her weekly press conference, Whitmer noted the rising death toll in addressing questions about why restaurants are closed to dine-in service through Dec. 8 as part of a three week “pause” to try to contain spread of the virus.

“I think in this moment, we need to give one another a little empathy and a little bit of grace and recognize the gravity of this situation,” Whitmer said.

Whitmer said no decision has been made on whether to extend the three-week “pause” on dining inside restaurants and bars beyond the Dec. 8 date spelled out in MDHHS Director Robert Gordon’s public health order, which has the weight of law pending court challenges.

“I don’t want them to have to make tough, awful decisions that could jeopardize their workforce and their customers, because I want them to be successful and I know they need help, and I’m trying to give them that help,” she said.

Whitmer has asked lawmakers to appropriate $100 million for a state-level economic stimulus program to provide direct aid to businesses ailing from the pandemic, including the hospitality industry that’s been hampered by her administration’s shutdowns and capacity limits.

The governor did not say how much of the proposed aid fund would be dedicated to specific businesses that are currently shuttered, such as restaurants, bowling alleys, movie theaters and other entertainment venues.

Whitmer’s administration has already begun to crack down on bars that have been open for patrons since the second shutdown began.

Last week, the Michigan Liquor Control Commission suspended the liquor licenses and permits of Jimmy’s Roadhouse in Newaygo, Brew Works in Fremont and The Meeting Place in Fenton for providing in-person dining, allowing non-residential in-person gatherings and other violations of Gordon’s epidemic orders.

Whitmer’s warning Tuesday against more restaurants and bars defying the MDHHS order and reopening came a day after the owner of the Joe Vicari Restaurant Group distributed a letter to hundreds of restaurateurs asking them to meet this week to discuss their options if the current three-week order halting dine-in service is extended.

“The malls are packed with holiday (shoppers). Hair salons and gyms can remain open, yet our restaurants are closed,” the letter from restaurateur Joe Vicari reads. “Our industry cannot survive another extended closure.”

The Michigan Restaurant and Lodging Association has sued Gordon over the shutdown order in federal court, arguing that restaurants are being singled out without a justified cause or data proving they are the source of COVID-19 spread, as opposed to the spring shutdown when most other industries also were halted.

The rolling weekly average number of new positive cases has fallen from a high of 7,270 on Nov. 21.

One public health expert told Crain’s on Tuesday that the drop in new confirmed cases is largely a reflection of less testing that occurred over the four-day Thanksgiving holiday, when many drive-thru testing sites were closed.

“I think we will see a little decrease in the positivity of the cases because we did not have big numbers of people who got tested this (past) weekend,” said Dr. Mouhanad Hammami, health officer for the Wayne County Public Health Division. “It will catch up.”

On Monday, the positivity rate for COVID tests was 14.7 percent, the highest it’s been since April 22, state data show.

Michigan hospitals also reported having more patients with confirmed cases of COVID-19. The statewide patient count for COVID-positive patients was 3,884 in Monday’s survey, about 5 percent higher than a week ago.