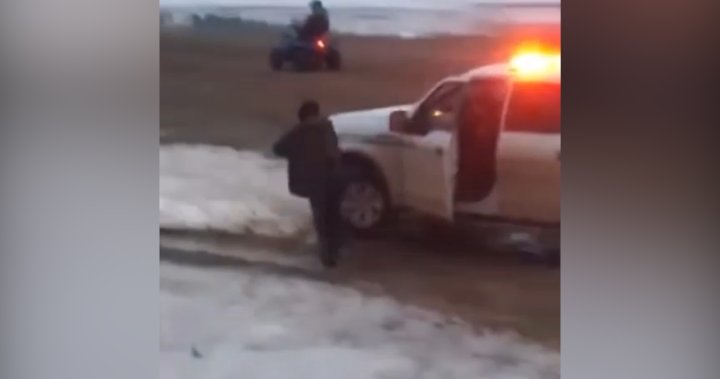 An RCMP officer in Nunavut “did not intentionally strike” an Inuk man with his truck’s door over the course of an arrest last June, according to external investigators with the Ottawa Police Service.

The OPS announced the results of its investigation on Tuesday, in which the service recommended no criminal charges against the officer in question.

The Ottawa police have an agreement with the RCMP and the Nunavut government to act as third-party investigators in major incidents involving the mounted police.

In this instance, the OPS criminal investigation was tied to an incident on June 1 in Kinngait.

Video surfaced on social media showing a man stumbling across a slushy, snowy road before a pickup truck, with the driver’s door open, pulls up behind him and plows into him, knocking him to the ground.

RCMP said the man was then arrested and placed in a Kinngait jail, where he was allegedly beaten by another inmate. He was then flown to Iqaluit for further medical attention.

The arresting officer was placed on administrative duties in the aftermath of the incident.

The OPS investigators dispatched to Kinngait interviewed 14 witnesses, both civilian and police members, and examined the scene and the police vehicle involved. A review of third-party video was also part of the OPS investigation.

The Ottawa police concluded the incident “does not meet the threshold of a criminal offence” of assault or assault with a weapon “as the applied force was unintentional.”

The OPS said it would not comment further on the incident.

The RCMP also said in a release it would not comment on the investigations or the OPS findings so as not to influence both an ongoing internal review and an independent public interest investigation launched by the Civilian Review & Complaints Commission (CRCC) for the force.

The independent investigation will look to see whether racial bias could have played a role in the incident.

The independent investigation will look to see both whether use of force in the arrest was justified and if racial bias could have played a role in the incident.

“I am concerned with the conduct of RCMP members involved in this serious incident and will monitor both the OPS (Ottawa police) investigation and the RCMP’s Code of Conduct investigation,” Michelaine Lahaie, chair of the CRCC, said in a release last June.

“I am aware that there is historical distrust by Inuit toward the police and I am committed to increasing RCMP accountability.”

Video footage of the incident sparked outrage online and in the upper echelons of Canadian government.

Nunavut Justice Minister Jeannie Ehaloak said at the time that she was “very concerned by the unnecessary force, the violence and the lack of respect.”

“Nunavummiut should not fear this kind of treatment and disregard for safety and basic rights.”

Chief Supt. Amanda Jones of the RCMP’s V Division acknowledged in June that there are long-standing issues in the relationship between the Mounties and Nunavut’s Inuit population. She pointed to officer burnout as a contributing factor in ongoing tensions between police and the community.

She also called the arrest “disturbing” and “intolerable.”

Marc Miller, Canada’s minister of Indigenous services, said he “watched in disgust” the video of the incident. Speaking in June following the arrest and other instances of police violence against Indigenous people, he said it was a “pattern that keeps repeating itself.”

“Far too many Canadians feel fear and anxiety at the sight of law enforcement officers and authorities” because systemic racism against Indigenous and racialized people persists, Prime Minister Justin Trudeau acknowledged in June.

“This has long been their reality,” he said then, “but over the past weeks, we’ve seen a large number of Canadians suddenly awakened to the fact that the discrimination that is a lived reality for far too many of our fellow citizens is something that needs to end, and that is what we are working on.”

RCMP Commissioner Brenda Lucki, who acknowledged systemic racism exists in the force in June after initially saying she was “struggling” with it, said in November the RCMP now has an action plan to address systemic racism in its ranks.

3:31‘Disturbing’ police violence against Indigenous people will be investigated: Trudeau