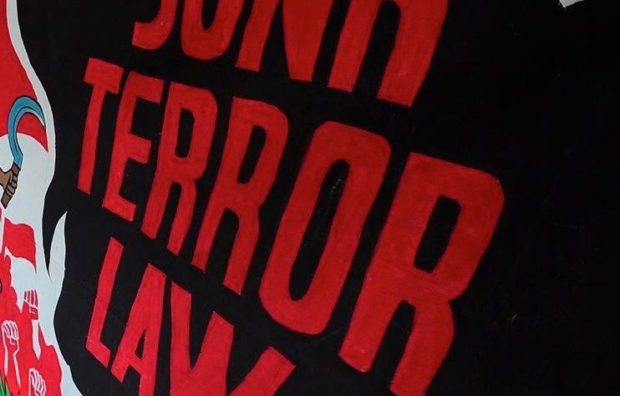 DAVAO CITY—A group based in Mindanao is appealing to President Rodrigo Duterte to suspend the enforcement of the Anti-Terrorism Act even as it vowed to closely monitor the controversial law’s impact on people’s rights during its implementation.

The group Alisto (Be Alert) is composed of civil society groups in Mindanao and has transitioned from examining martial law enforcement to watching closely how the Anti-Terrorism Act would be implemented in Mindanao.

In a statement released during the group’s online launch on Tuesday (Dec. 1), Alisto questioned the law’s constitutionality and urged Duterte to allow further review to ensure it would not be abused, the Constitution wouldn’t be violated and people’s rights are protected.

“If we talk of legacy, it’s not yet too late,” said Mags Malana, one of Alisto’s spokespersons and also convenor of Konsensya Dabaw, one of the groups that are part of Alisto.

Duterte, said Malana, would not want martial law and abuses of the terror law to be his legacies in Mindanao.

“He still has a chance to right the legacy,” she said. If Duterte wanted to leave a good legacy, Malana said he should stop implementing the terror law and examine martial law “closely.”

The group reiterated what 37 petitions in the Supreme Court had already raised about the controversial law:

Though martial law already ended in December 2019, threats of red-tagging, terror-tagging, red-baiting and racial profiling are still present. Vulnerable to these are indigenous peoples, Bangsamoro and human rights defenders, according to Alisto.

The terror law made these threats more pronounced, the group said.

The law, said Maglana at the forum, “presents a real threat.”

She said although the terror law has an impact nationwide, it has more serious implications in Mindanao.

The terror law is “an explosive device that could harm Mindanao and the fragility of peace in the country,” Maglana said.

She said different groups in Mindanao would continue to speak out against the terror law and martial law.

She added that while it appeared in the past that the groups in Mindanao were not united, “I’d like to think that this time, more Mindanao groups would unite and this would hopefully mean louder voices.”

Through its hubs across Central, Western, Southern and Western Mindanao, the group urged citizens to report abuses through its hotline and social media page.

The group’s network of lawyers and civil society groups vowed to provide legal, paralegal, documentation and psycho-social assistance to citizens in distress.

“We will continue calling for respect of human rights,” said Cabarde.

“Food, work, shelter and health—these are all part of (the citizens’ human rights, which the government has the obligation and duty to protect,” he said.

Don’t miss out on the latest news and information.