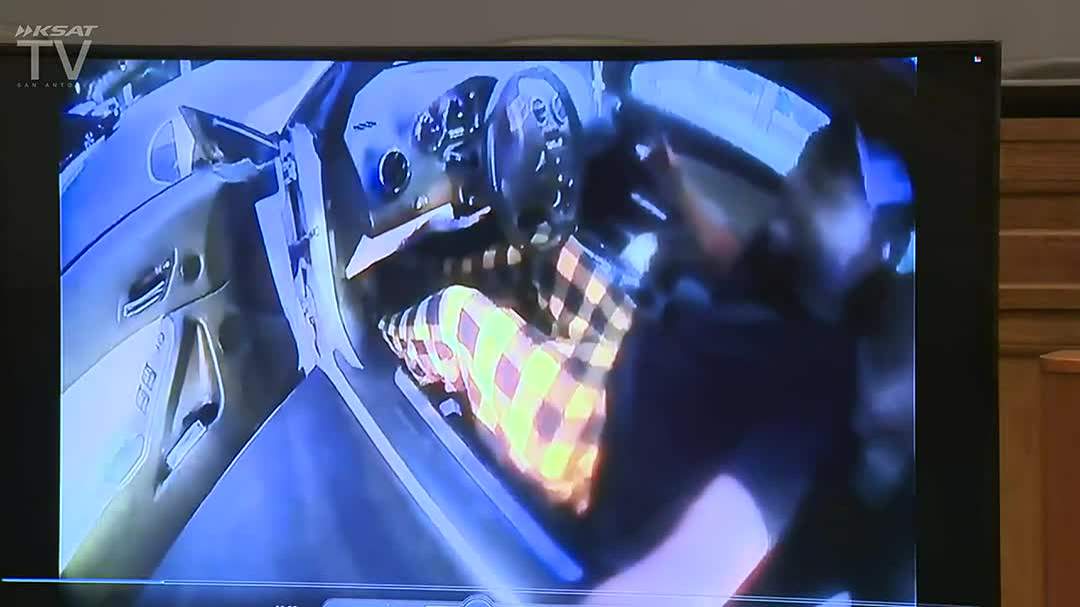 While asking a judge to toss out charges against a Black driver who was shocked using a stun gun during a New Braunfels traffic stop over a dirty license plate, Comal County Criminal District Attorney Jennifer Tharp in late September still partially blamed the driver for what led to his arrest, according to court filings uncovered by the KSAT Defenders.

Clarence Crawford, who was wrestled to the ground, shocked and handcuffed, was charged with fleeing from a police officer and interfering with public duties in connection with the traffic stop, which happened on Jan. 15. His charges were not dismissed until Sept. 29, court records showed.

Tharp conceded the actions of New Braunfels Officer Kaleb Meyer, who has since resigned, were “less than professional” during the incident and noted that then-Police Chief Tom Wiebert requested that the case be dismissed, but also claimed there was “legally sufficient evidence to pursue these charges.”

“(Crawford’s) actions were overly dramatic,” Tharp wrote in the filing.

“We were actually very surprised to see that and felt like it was just very self-serving on the part of the district attorney’s office and probably an effort to try to protect the city, frankly, from any civil liability,” Crawford’s civil attorney, Paul Vick, told KSAT.

Dismissals are generally not as detailed as Tharp’s two filings.

Vick said a lawsuit will likely be filed over Crawford’s arrest after Thanksgiving.

“Why did it take them nine months to dismiss that case when they had the video immediately and it’s crystal-clear that there was no probable cause,” Vick said.

Tharp has not responded to requests for comment over her filings.

The motion to dismiss

In the motion seeking to drop charges, Tharp laid out the evidence against Crawford.

Meyer noticed Crawford’s dirty license plate as the two were traveling north on IH-35 on the evening of Jan. 15. Crawford’s attorneys noted that the officer was able to read the license plate and relayed it to dispatch in the dash cam video.

Meyer activated his emergency lights before Exit 187, but Crawford did not take the off-ramp until Exit 189 and passed a few parking lots before stopping in a clinic’s parking lot.

“At this point, the offense of eluding … would have been complete and anything that occurs after this point would be irrelevant to (Crawford’s) guilt or innocence as to this offense,” Tharp wrote.

Meyer approached Crawford’s vehicle with his gun drawn, an action that did not follow New Braunfels police protocol, Tharp wrote. Crawford was compliant with Meyer, placing his left hand on the steering wheel while his right hand was visibly holding his cell phone.

“(Crawford’s) actions were overly dramatic,” Tharp wrote. “However, Officer Meyer did not attempt to deescalate the situation.”

Because Crawford didn’t put his face “completely down on the ground,” Meyer used his taser to stun Crawford twice before handcuffing him.

“These facts, as set above, could arguably support a conviction for interference with public duties,” Tharp wrote.

“However, although the facts above could legally support convictions for both eluding and interference with public duties, Officer Meyer’s behavior in the instant case was less than professional,” Tharp wrote.

Tharp said Meyer’s resignation from the police department, which did not come until September, made his availability as a witness “questionable” and Police Chief Tom Wibert, who resigned partially due to the incident, recommended that the cases should be dismissed, a suggestion Tharp said was “not unreasonable.”

In a news release on Crawford’s behalf, he started by thanking the female New Braunfels police officer who quickly de-escalated the situation when she arrived on scene.

“Mr. Crawford may not be here today if not for her,” the statement read.

City Manager Robert Camareno said video of the incident was not released sooner at Crawford’s request. Vick disputed that claim.

“In fact, Mr. Crawford was not asked if the video of him being assaulted could be shared with the public nor distributed on a flash drive,” the statement read.

While Crawford’s arrest happened in January, Vick argued that police interactions with minorities in New Braunfels have been discussed in public meetings since at least January 2015. During that meeting, a council member said that “we have all the same ingredients brewing here as in Ferguson,” referring to the 2014 incident in Ferguson, Missouri, where Michael Brown was shot and killed by a police officer, Darren Wilson.

Despite his charges being dismissed, Crawford lost his job and is currently unemployed, according to his attorney.

“Despite all of this, Mr. Crawford continues to strive to be part of the solution,” the statement read. “Unfortunately, leaders in the New Braunfels city government have yet to give him that opportunity.”

Copyright 2020 by KSAT – All rights reserved.